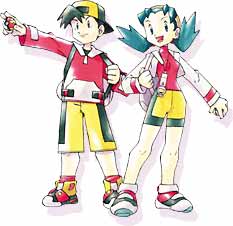 First off there is an introduction of a new female character to the game, you can see her on the right with Gold. You'll be able to select her or Gold to play with. Remember that this feature was promise awhile ago when Gold and Silver were just being announced. Must have gotten top many complaints. ;-)

Mobile System GB (taken out of American and European versions)

Pokémon Crystal will be the first game to support the "Mobile GB System." With this you;ll be able to play with people from the other side of the globe. Also with this feature you;ll be able to trade and download Pokémon with special abilities and eggs from Nintendo that contain shiny Pokémon.

Here are some screen shots of the adapter in action:

Lastly, Pokémon Crystal will have animated entering of Pokémon into battle, unlike the other Pokémon games.