PKMN.NET :: Island 3: Kin Island :: FireRed, LeafGreen Sevii Islands
It’s about time we continued with these islands. OK, here we go. Enter Island 3 and you’ll see two bikers circling a poor defenceless person. Talk to them all you like they won’t go anywhere. It’s OK- revenge comes along in a minute (you get to help out even if you couldn’t care less). 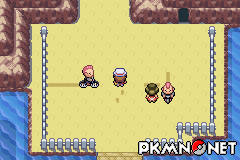 If you’ve defeated the Elite Four and got your National Dex, then there’s a cave just above you that leads you to a stretch of grass (there’s a man inside this cave who gives you some sort of item). In this patch of grass, you get to catch some wild Dunsparce. One of those Pokemon you always caught to have, but never to use. Goody.

Continue North into town. It’s very little. Even more so because of the gang of Bikers blocking your way. How rude. They may be bullying someone, but that’s irrelevant. The fact is that they’re in your way. Go teach them some manners. Defeat three of the bikers, then their boss, and they’ll disappear. Simple. Well, no, actually. The battles are all continuous. One after another. All the Pokemon are around Level 35-40 mark, and they are all Koffing, Grimer, or the evolutions of those two. When you’ve finally defeated them, the person who they were bullying will give you some sort of item for your troubles. Now all the bikers have been booted off the island, you get to continue.

Now you get to go either left or right. On your right, a fence with a cut-able down tree in it. Cut it down and get some sort of item. On your left, a route. Follow it. Now. Chop chop. There’s a few items and a few trainers here. Eventually you’ve go over some sort of bridge, and then into a forest. 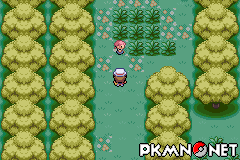 Trust me, you have NEVER seen so many cut-able trees in the same place ever. The forest is full of them. As well as trainers and items. Explore, and do as you wish. Just make sure that you fight your way to the top-left hand corner. There’s a girl there who is (what I can only describe as) “possessed” by a Level 30 Hypno. Defeat the Hypno, either by fainting it or capturing it, and you’ll be warped back to Island 2. You see, it was the little girl who went to Island 3 and never came back. With the substandard parents? That’s the one! As a reward for finding her, you get to play the mini-games with your Wireless Adapter, simply by going into the house and talking to the women behind the counter. And there you have it. Island 3 is completed. Happy now?