PKMN.NET :: Island 4: Floe Island :: FireRed, LeafGreen Sevii Islands
If you haven’t yet defeated the Elite Four, then going to Island 4 and beyond will be a bit hard. Probably because you can’t do it. I’ll tell you what, go defeat the Elite Four, and make sure you’ve got the Ruby Plate from Island 1 first. Take it to that man by the Machine in the Pokemon Center, then he should give you the Rainbow Ticket, which should allow you to visit Islands 4-7. 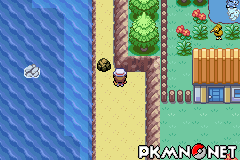 Done yet? Great. Travel to Island 4. It’s quite small, but has a massive cave on it. Very, very big and very hard. But we’ll come to that later. On the far west of the island, there’s a strip of sand. Go up it, and you can smash a rock and come to some sort of item.

At the actual top of the island, there is…… A BREEDING CENTER!!! Now you really can breed yourself that little brat that knows that dead good attack, and get all your personalities and whatever’s right. Stop distracting me. I’m trying to talk here. 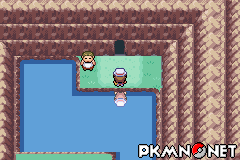 At the west of the island, you can surf up a lake (stopping off to get the item on the way) and you’ll arrive at the cave. It’s an Ice Cave, and it’s very tricky to negotiate. The main purpose of the cave is that it holds HM07- Waterfall. Of course it’s very far in, so be prepared for a long trek. There’s also a brief battle with a member of Team Rocket, who appear to have captured Lorelei. Defeat one person, and they’ll bugger off. You can also catch Swinub, Delibird (Fire Red Version only) and Sneasel (Leaf Green Version only- meaning I couldn’t get one) in this monster of a cave. Other than that, Island 4 has nothing else.

Well? Haven’t you got a thingy to breed, or something?