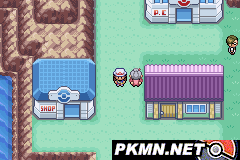 Island 7 isn’t tiny, but it isn’t big. It’s rather interesting actually. Island 7 is the last Island that you can get to normally in the game. The actual village is once again tiny. You get the choice of either trekking North or South. To the North (after a short Surf) is the Trainer Tower. It’s changed quite significantly since R/S, but I’ll explain all that in another page whenever I get round to it).

South from the village, is a very large route that twists and turns all over the place, and is full of trainers. Eventually you’ll have the choice of travelling further South or South-West. Choose South-West. Trust me. You’ll be better off in the long run. As you travel down the grassy route you may be fortunate enough to bump into wild Sentret (not again), wild Phanpy, wild Skarmory (Fire Red Version Only) and probably some other Johto Pokemon of whom I was not destined to meet. How unfair. 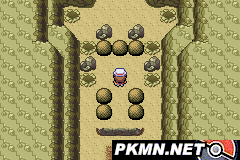 Eventually you’ll reach a cave. Inside is a puzzle, which needs to be completed using Strength. Why on earth they chose to have the puzzle here is beyond me. Don’t argue, just go in and solve it. It’s one of those puzzles where you have to push the rocks into the holes. It looks kinds complicated, but it’s actually quite simple. Push the middle of the upper rocks straight up until it goes into the hole at the very top of the room. With the two other upper rocks, push one of them into the middle (where the first rock originally was). Now push it two squares up, and then push it left or right until it falls into the hole. Do the same with the other upper rock. Now for the lower row of rocks. Push the two that are the nearest to the door, left or right respectably until they reach the wall. Then push each one up and into the hole. You should have two rocks left. Push them straight up and then to the side, and into the holes. Once you’ve done that, there will be an Earthquake (as usually happens whenever you complete random puzzles). A message will appear, saying something special has happened.

Now come out of the cave and continue down the route Southerly. Keep going until you reach the water. Now, dotted along the coast in all directions, are old ruins. Now that we’ve solved the puzzle of the Random Rocks (what a great puzzle name), these ruins will contain none other than UNOWN! All 28 of them (yes 28- shut up, I’ll explain in a minute) are shared amongst all 7 ruins. That’s 4 to each ruin, as I, your resident Maths Master has worked out.

Now, about these two new Unown- one is a “!” and one is a “?”- basically an Exclamation Mark and a Question Mark. They were previously found to be in R/S, but it was never discovered how to get them. Looks like the mystery’s just been solved.

And that’s it. Island 7 is completed. You’ve completed all the normal islands available in the game. Now you have no choice but to start filling up your Pokedex, as there’s nothing else left to do in the game. How boring.