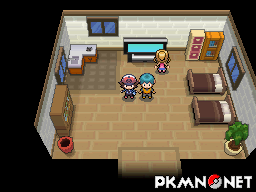 In the run up to Black and White, Nintendo bigged up the new battling system, claiming that "when certain attacks are used after other attacks secondary effects may occur". And the world gasped. This could completely change battling forever.

What they didn't say was that this only applies for three attacks.

Doesn't sound so exciting anymore does it?

The three attacks in question are Grass Pledge, Fire Pledge and Water Pledge. All three of them are learnable via a Move Tutor and aren't terrible attacks by themselves. 10PP, 50 base damage. But in double or triple battles, when they are used consecutively all sorts of magic things start to happen.

Using these two attacks consecutively causes a rather lovely explosion, which in turn causes all of your Opponent's Pokémon in battle to lose 1/8 of their maximum HP at the end of each of the following four turns.

Using these two attacks consecutively turns the battlefield into a swamp, reducing the Speed of all of your Opponent's Pokémon.

Using these two attacks consecutively causes a rather lovely rainbow to form over the battlefield. For some reason, this increases the probability of any additional effects your following attacks may induce occurring. I wouldn't complain.