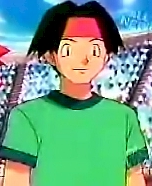 Tracey is just a travelling boy that sketches and watches Pokemon and is also classified as a Pokemon watcher. He is very skilled in the art of pokemon and art itself. He started travelling with Ash and Misty not long after Brock left because they told him they knew Prof. Oak and he admired Prof. Oak.

He just found Ash and Misty while they were helping out a Lapras being bullied, he complimented on Ash's Pokemon in the way they fought and the way they looked. He is also quite essential as his Marill and Venonat are useful in detecting things and his knowledge of the Orange Islands.

A Scare in the Air

Fit To Be Tide

The Joy of Pokémon

A Way Off, Day Off

Get Along, Little Pokémon