PKMN.NET :: Island 2: Boon Island :: FireRed, LeafGreen Sevii Islands
Before you start polishing your Pokéball containing the freshly caught Moltres, why not continue with the islands? Good idea, huh? Trek back to sailor dude (it’s an awfully long way, isn’t it? Unless you fly, which is a good idea), and tell him to take you to Island 2. Off you go. Done? Great. You’re now on Island 2. (Hint: When those two people are talking in front of the massive machine on Island 1, one of them gives you the pass that enables you to visit the islands whenever you like. Isn’t he a kind git?)

Anyway, Island 2 is even quieter and even smaller than Island 1. There are a few good things happening though. There’s a man who is willing to sell you a few Great Balls and those cans of water that heal HP. Wow. I’m in shock of the greatness of that. 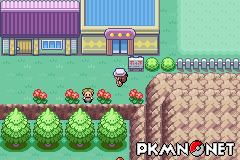 One of the few houses on the island is very prettily decorated around the door. At first glance I thought that it was a contest hall. No such luck. When you enter, you see a man pacing around looking worried. Then he spots you and comes over to talk to you. His daughter visited Island 3 and hasn’t come home yet. Because he’s such a substandard parent could you possibly help find her? Why not? After all, you’re stupid enough to agree to everything that anyone ever asks you to do. Then a biker suddenly rides in, says something that sounds threatening, before leaving again. Must be common courtesy in those parts or something. You can leave now.

At the bottom of the island, there’s a tree to cut down with an item behind. I can’t work out what it is, so if anybody could help it would be brilliant. 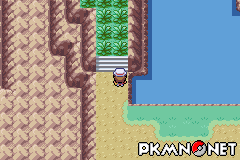 If you then walk north there’s a little pathway covered in grass next to a big lake with a waterfall. How scenic. There’s a house at the top of the lake that contains the most exciting thing on the island. The woman in there offers to teach your starter a new move! That’s not the exciting part. The good news (and the exciting part) is that she offers to teach you one of the lost attacks- Hydro Cannon, Blast Burn or Frenzy Plant! They all have a PP of 5, an Accuracy of 90%, and a base damage of 150! However, the User can’t attack next turn (rather like Hyper Beam). In order to receive the attack, you have to have the fully evolved starter first in your party. It also has to be Level 45 or over.

So there we have it. Island 2. Didn’t take that long did it?

Thanks to Typhlosion for this!