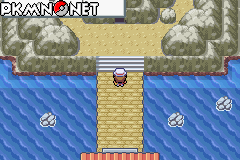 Island 8 is another small island. Well, it's not entirely small, due to the size of the cave, but other than that it's tiny.

To get to Island 8 you'll need the Mystery Ticket. This is another flippin' ticket that isn't available normally in the game! Tickets! Tickets! Too many bloody tickets! I'm sick of 'em.

Island 8 consists solely of one cave. As soon as you enter it you get to walk forward and go down a ladder. Then you go into a room and down another ladder. 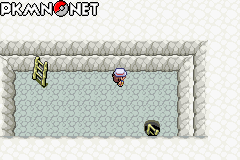 This leads you into the main "room" of the cave. You get to walk upwards up a narrow passageway. It goes on forever. Really, really long When finally, you get a choice to go left or straight on. Unless you have a thing for dead ends, choose straight on. Yet again it's really, really far (you'll get the chance to go right, ignore it). E-V-E-N-T-U-A-L-L-Y you'll come to a choice between left and right. Down the path to your left is a Level 70 Ho-oh. To your right, a Level 70 Lugia. Much to contrary belief, when you capture one of them the other DOES NOT disappear. Now you add both to your collection. Cool isn't it?