PKMN.NET :: Beauty and the Beach :: Banned Episodes Other Pages 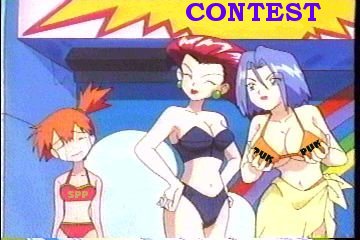 This was the very first banned episode in the English speaking world. It was banned because of James' entry into a swimsuit contest. He used a pair of inflatable breasts in an attempt to beat all the competition. Here's a translation from the Japanese version:

Jessie and James push Misty out of the way.

James: What does it matter when I'm this beautiful?

James: Look, I can even make my chest bigger.

They inflate to an enormous size.

Brock, commentating: Suddenly, two mistresses appeared. But, will the judges think their appearance is rude?

Brock: It's perfectly fine! Everyone has welcomed them!

James: Wait until you're older and have these.

Brock: They are... the Rocket Sisters.

Now, this episode was eventually dubbed, with this scene removed. Sadly, it has only aired in the US.

A little synopsis for you, in this episode, Ash and the rest of the gang use a boat but crash it into an old restaurant owner's dock. It turns out to be his boat also, and they offer to work to pay for the damages. While they work for him, Team Rocket start to work for Brutella (Nastina's cousin) in her restaurant, to pay to fix their Gyarados sub, which was damaged when they crashed into the boat. While they are they are there, a Pokémon Swimsuit contests if on, and everyone enters, including Ash's mom, who in the Japanese version wins. After deciding they won't win after Gary's entry, Team Rocket decide to ruin the contest, but Ash soon puts a stop to this. And, with their debts paid off, the trio say goodbye to Moe and continue on their journey.