Since the introduction of the Eon Ticket, the games have been huge fans of introducing Pokémon only available via events - Diamond and Pearl are no different, with Shaymin, Darkrai and Arceus all only being available via item-driven events.

Darkrai; a Dark-type legendary, Shaymin; a little grass hedgehog thing, and Arceus; the supposed God of all Pokémon, which can change it's type based upon the item it's holding.

All three are only available in the game after receiving the Member Pass, Oak's Letter and Azure Flute respectively. 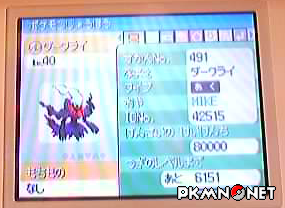 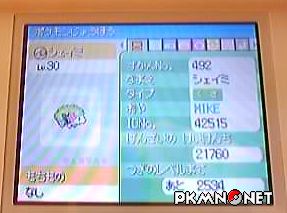 What a clever glitch.

Now I'm going to explain to you how, if you have access to the Japanese games, you too can catch Darkrai and Shaymin.

Please note that the use of these glitches are potentially dangerous if done incorrectly, and PKMN.NET accepts no responsibility for games which muck up due to attempting the following steps. If you follow the steps correctly, you SHOULD be okay, but if your game means that much to you it really isn't worth risking it.

All the following methods start off from the same point: firstly, make sure you have a surfing Pokémon, a flying Pokémon, the Underground Kit and have saved just outside the Elite Four. Enter, go up the lift and go into the room with the first Elite Four member. Immediately turn round so you are facing the door, and use Surf and move forwards. You'll Surf through the door and land in the surrounding darkness. At this point, select the step counter in your Pokétch and reset it - it's very useful in determining how many steps you've made. Now decide if you're going for either Darkrai or Shaymin, and follow the necessary following steps:

3. Use the Underground Kit to go Underground, before immediately resurfacing.

4. You will be in a glitchy world. Load up the World Map in your Key Items and close it. This will restore the graphics.

5. Head left and upwards and enter the forest. Here you'll see a wild Darkrai. It's level 40. Save and catch. Fly off the island or use the boat. The choice is yours.

5. Check on your World Map in your Key Items that you're directly North of Route 224 (that's the vertical one to the side of the Pokémon League). If you're not, restart your game immediately and start again before you break something.

6. Use the Underground Kit to go Underground, before immediately resurfacing.

7. You will be in a glitchy world. Move North but immediately stop as soon as you enter a new area (the music will change); this should literally be only three or four steps.

8. Load up the World Map in your Key Items and close it. This will restore the graphics.

9. You should be on a flowery route. Head North for a minute or so and you'll see a wild Shaymin. It's level 30. Save and catch. Fly off the island.

There's also one last little trick you can use the glitch for. When you reach the room containing the third member of the Elite Four, simply turn back to the door and Surf through it. Follow the walls of the room until you are at the other side, directly above the top door. Then simply walk straight upwards until some dialogue begins and you're led to the Hall of Fame. Bingo - defeating the Pokémon League by only defeating two of the Elite Four.