Coro Coro reveals a new Pokemon, evolution of one you probably already know.

Coro Coro is the usual suspect when it comes to dishing out the dirt regarding new Pokemon, and this time is no different. Say hello to (Japanese name) Ninfia! 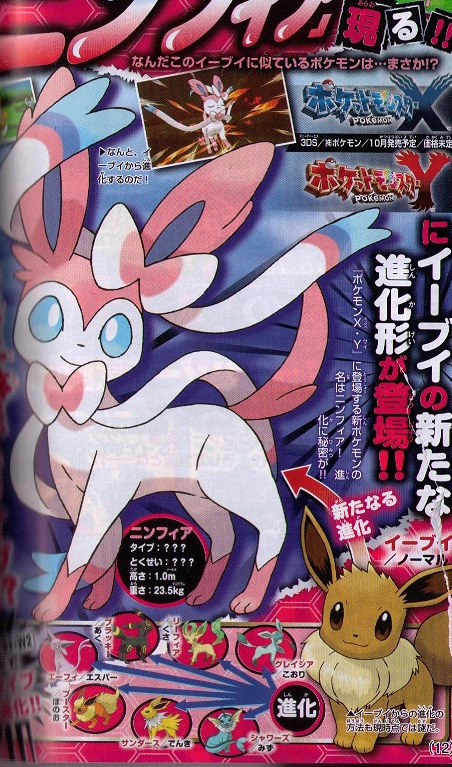 ...it's apparently an evolution of Eevee. So they say. I mean they say that.. Personally I think it looks more related to Victini but who am I to argue with our GameFreak overlords?

What type is it you may ask? Well right now it's top secret as well as it's evolution method, but you can have small details that it's 1m and weighs 23.5kg.

COMMENTS
on Wed 13 Feb 2013 00:24:41 UTC.
It doesn't look bad. Looks like it's ready for a catwalk.
Stmacl on Wed 13 Feb 2013 03:41:43 UTC.
I'm wondering what type it's going to be since, psychic's already taken by Espeon. Unless it's normal type and for the first time Eevee can evolve through plain leveling, (which'd be awesome btw gamefreak)
THE ARBITER on Fri 15 Feb 2013 20:02:17 UTC.
I am guessing it is a flying type due to colorization and the way the ribbons flow and also Eevee is noted to be unstable so it would be highly unlikely to be a level up but it may be triggered by a new area or a new or old item guessing new because it would have already been in game by then unless there is a regional link that they would make up to pass it off
Kakari on Wed 06 Mar 2013 17:13:40 UTC.
It looks terrible its too pale and doesn't match the other eevees

I reckon its a bug type because originally it was called ninfia a nyith I's a bug and the bows on it are butterfly's or moths
freddyeddy on Tue 23 Apr 2013 03:30:17 UTC.
I'm guessing it's a normal type.... purely because of the colour scheme, and the fact that it doesn't have wings, so i don't think it's flying.