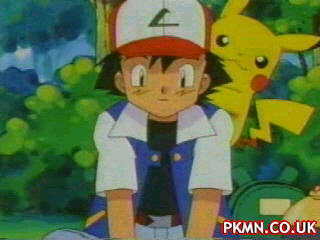 Ash Ketchum is a boy who once left home to become a Pokémon trainer. The Pokémon he starts off with is Pikachu. When Ash and Pikachu left Ash's home town of Pallet they saw Ho-oh- a Pokémon based on the legendary bird the Phoenix who only appears to saints. Ash and Pikachu eventually became best friends with his two other friends Brock and Misty, who joined Ash on his Pokémon journey, who helped him to collect all eight badges and get into the indigo league. He finished in the top sixteen where his rival, Gary, finished behind him.

He got his first badge by his Pikachu thunder shocking the sprinklers the water came down on Brock's Onix and Ash wins the Boulder Badge.

He won the Cascade Badge when he was about to beat Misty's Starmie. When Team Rocket came and stole all the water with a giant Hoover Ash comes to the rescue by pushing the lever down and the water comes back out into the pool and Misty's sisters give him the cascade badge.

He gets the thunder badge by defeating Lt Surges Raichu and wins the thunder badge. He gets the marsh badge by getting a haunter from Pokémon tower and making Sabrina laugh and by doing that her Kadabra couldn't stop laughing, and was unable to battle, so Sabrina's father declares Ash the winner. He wins the rainbow badge by bravely going into the fire and Rescuing Erika's Gloom and Erika gives him the rainbow badge.

He wins the soul badge by defeating Koga outside the gym because Team Rocket destroying Koga's gym and when he defeats Koga. Koga gives him the soul badge. He wins the volcano badge when Blaine's gym is about to erupt and they barely escape.
They have their battle on top of the volcano and Ash's Charizard uses seismic toss and knocks out Blaine's Magmar. He wins the Earth badge by defeating Jessie and James with Giovanni's Pokémon. All his Pokémon faint except Pidgeotto and Ash goes on to win the battle for the Earth badge.

After the indigo league Ash heads back to his home town of Pallet and has a party with all the folks from pallet town. After that he head off to the Orange Islands. Professor Oak asks him to get the GS ball for him. From here gets a new friend in the Orange islands called Tracey. When he joined, Brock stayed with Ivy. At the end of the Orange islands saga, he returned home and Tracey stayed with Oak, while he, Brock, Misty and Pikachu continued on to the Johto League.

In In The Shadow of Zekrom!, Ash sets out for the Unova region, leaving his friends and family behind, with only his Pikachu for company. He teams up with Iris and, later, Cilan, on a journey through the Unova region.

Appears between Ash Catches a Pokémon and Challenge of the Samurai
Moves seen used: Harden
He came between Caterpie and Butterfree and did nothing- much like Tracey between Kanto and Johto.

Appears between Ash Catches a Pokémon and Pallet Party Panic
Moves seen used: Gust, Wing Attack, Sand-Attack, String Shot
Pidgeotto was caught in Ash Catches a Pokémon. It remained as Ash's Team Rocket balloon destroyer until it evolved in Pallet Party Panic, in which it evolves to Pidgeot and stays to take care of the little Pidgeys and Pidgeotto.

Appears between Bulbasaur and the Hidden Village and Bulbasaur... The Ambassador
Moves seen used: Whirlwind, Vine Whip, Tackle, Leech Seed, Razor Leaf
He first appeared in Bulbasaur and the Hidden Village, the first of three sequential Get-All-The-Starters episodes. He refused to evolve in Bulbasaur's Mysterious Garden. He goes back to Oak in Bulbasaur... The Ambassador. Bulbasaur was a random battler on Ash's team, as well as a versatile PokÃ©mon due to its Vine Whip attack. It often used its vines to grab, hold and stabilize things. Razor Leaf was often used to break, snap or rip things. This meant Bulbasaur was always useful, but never developed.

Appears between Here Comes the Squirtle Squad and The Fire-ing Squad!
Moves seen used: Water Gun, Skull Bash
In the last of the sequential starting PokÃ©mon episodes, Here Comes the Squirtle Squad, Squirtle joins Ash's squad after being the Ronnie Cray of the PokÃ©mon world for a while. It does nothing interesting for 96 episodes - then Squirtle helps save some people in the The Pokémon Water War. Squirtle finally leaves in The Fire-ing Squad!, having not even evolved. Ash Ketchum: World's greatest trainer.

Appears between Primeape Goes Bananas! and The Punchy Pokémon
Moves seen used: Thrash
Primeape is caught in Primeape Goes Bananas!, after an incident that can only be described by "Donut, Pigs, Action". After a few episodes with a few weak jokes about how Primeape will go nuts so Ash won't use him. He finally leaves in The Punchy Pokémon. Ash gives him to a superior trainer named Anthony.

Appears between March of the Exeggutor Squad and Attack of the Prehistoric Pokémon
Moves seen used: Flamethrower
See Charizard

Appears between Attack of the Prehistoric Pokémon and Fighting Flyer with Fire
Charmander was the second starter to be "earned". He used to belong to the person with the worst British accent in the world, Damien. Acquired in Charmander - The Stray Pokémon. He evolved into Charmeleon in March of the Exeggutor Squad after flaming the backsides off of several hundred Exeggutor.. He then stopped listening to Ash. He evolved into Charizard in Attack of the Prehistoric Pokémon and started actively setting Ash on fire. He beat Magmar in Volcanic Panic; one of his many high points. Eventually, he calmed down in Charizard Chills. He left in Fighting Flyer with Fire. He returned for a while in PokÃ©mon 3.

Snorlax
Appears from Snack Attack
Ash got the PokÃ©mon in Snack Attack. It now resides in the care of Prof Oak only reappearing for a "hilarious" phone call situation.

Heracross
Appears from A Sappy Ending
Caught in A Sappy Ending. Heracross remains at the forefront of Ash's wonderful attack plan, otherwise known "fight opponents with PokÃ©mon that have a weakness to the opponent".

Cyndaquil
Appears from Good 'Quil Hunting
Instead of obtaining Cyndaquil in the episode immediately following Chikorita Rescue, the writers fob us off with a roughly twenty episode gap until Good 'Quil Hunting. Unsurprisingly, Cyndaquil has done nothing interesting since.

Noctowl
Appears from Fowl Play
Ash caught a shiny PokÃ©mon! What are the chances of that? The most undeserving people get all the luck. Caught sometime Fowl Play. Woo.

Tepig joined Ash after it had been abandoned by its previous trainer.

Sewaddle
Appears between Sewaddle and Burgh in Pinwheel Forest and Battling For The Love of Bug-Types!
Moves seen used: Tackle, Razor Leaf, String Shot, Bug Bite
Has Swarm as it's ability

Pokémon - I Choose You!