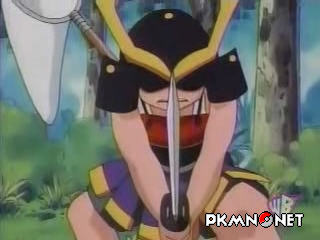 Samurai was the first ever character-of-the-day to appear in the Pokémon anime.

He resides in the Viridian Forest where he challenges all new trainers that pass through. Before meeting up with Ash he had previously lost to Gary Oak.

Ash did battle with Samurai which resulted in a stalemate between their Metapods. Neither party admitted defeat until their battle was interrupted by a swarm of Beedrill.

Samurai grew to respect Ash after Ash was able to defeat Team Rocket with his newly evolved Butterfree.

They vowed to meet again one day so that they could have a rematch... never happened.