It emerged in May 2003 that top American childrens network Kids WB had decided not to air the episode known in Japan as The Ice Cave!.

In the episode Ash and co. emerge from the Ice Cave with Brock taken ill. He is taken care of at a Pokémon centre. While he is there he nearly kisses a Jynx, while hypnotised. Nothing like this has happened since the first season, so it came as a shock to fans.

Luckily, no landmark events happen in the episode, which should have aired on the 31st of May on Kids WB. The following episode Beauty is Skin Deep was shown in its place. This meant an extra episode had to be dubbed in its place to make up the 52 episode season. It is rumored that this episode may be aired in the future, but it's not hopeful.

For those of you with slow browsers or who are just lazy and don't want to look through our episode pics, here is that fateful moment... 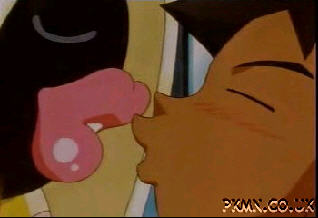