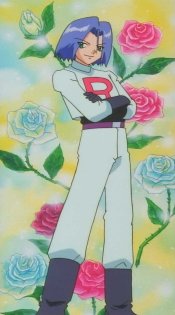 James is a proud(-ish) member of the infamous Team Rocket. He was born into a rich family, living in a huge mansion with his pet Growlithe, Growly. He ran away however, to escape his fiancee Jessebell, as she was determined to "train" him to be a proper gentlemen, even commenting as he fled from her: "You're not running properly!".
Having failed Pokémon Tech, he decided to join a bike gang, where he was known as "Little Jim" as he was the only member who still needed training wheels.
After his adventures here, he joined Team Rocket with his friend Jessie. The pair were partnered up with a talking Pokémon, Meowth, and on their pursuit of rare Pokémon, they stumbled upon Ash while attacking a Pokémon Centre in Viridian City. They were amazed at the strength of this boy's Pikachu, and decided they would catch it, consequently they have followed him ever since.
James collects bottle caps, and all though he has lost a substantial number over the years, he still has a considerable number safely stored in an album, which he collected using an Itemfinder. He also enjoys looking at himself... take that anyway you want ;)
Some people believe James is gay, as he frequently cross dresses in the show, but surely this is just a master of disguise at work? :)

Magikarp
Appears between Battle Aboard the St. Anne and Pokémon Shipwreck
James buys it from a trickster, but is forced to abandon it an episode later when it evolves into Gyarados